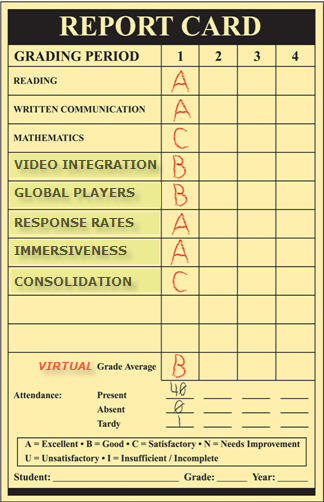 At the end of 2009, I posted my 2010 predictions for the virtual events industry.  Now that we’re nearly half done with 2010 (can you believe that), I decided to provide a self-assessment for my predictions.

Overall, I’ve decided on a grade of “B” (I’m an easy grader) – which may improve based on the second half of the year.  Let’s review the individual predictions.

In 2010, I believe that the virtual event platforms will integrate with third party video conferencing technologies in a big way – stirred largely by client demand for it.

While video conferencing integration has not (yet!) been implemented on a wide scale, we witnessed the first occurrence of telepresence enablement in a virtual event.

The Sustainability Virtual Summit: Smart ICT was produced by G2 Events, “featuring telepresence enablement, allowing roundtable and panel discussions to be broadcast between panelists in remote locations worldwide (first in a virtual event)”.

I attended the event and viewed a number of telepresence-enabled sessions.  While impressive, it should be noted that my prediction was around “incorporation of multi-party, HD video conferencing”, whereas the Sustainability Virtual Summit event enabled telepresence via “simulive” playback of pre-recorded sessions.

Multi-party HD video conferencing over the public Internet is likely a few years away – instead, we’ll likely see multi-party (with virtual event integration) enabled in a corporate setting, with its tighter controls over available bandwidth – and, with the option to distribute the video conferencing streams via IP multicast.

I expect to see another European-based platform emerge in 2010, along with one or more in Asia Pac.

Gensee, based in China, provides a “Web Virtual Events Platform”.  The market for virtual events in China seems to be less developed than in the U.S. and Europe – as such, Gensee may be well positioned to capitalize on any uptick in adoption (in China), as their platform was built to serve a Chinese audience.

“China has more than 400 million internet users, with Flash based virtual games and social network services very popular, although with its own flavors and local providers”, notes Benjamin Chen, CEO of Gensee Technology.

Chen continues, “China has many economic centers and many enterprises have geographically dispersed customers and employees. I already see great demands to complement physical trade shows, expos, events and e-learning with virtual components”.

VisualMente is another European player in the virtual events space – they’re based on Spain and have done virtual event campaigns for BlackBerry, among others.

To be fair, both Gensee and VisualMente were around when my predictions were made, so I didn’t technically predict their emergence.  That being said, I do believe in the trend that more and more players will enter the space, with a growing number of vendors outside of the U.S.  The U.S. is the most developed market to date (relatively speaking) – which means that even larger opportunities lie abroad.

If you’re aware of additional virtual event players (outside of the U.S.), please leave information in the comments section below – thanks.

While I can’t provide insight for “relative response rates” on audience generation for virtual events in 2010, I did write the following:

Virtual event show hosts will need to consider the incorporation of gaming, the creation of affinity programs and more.

Cisco Live and Networkers Virtual is incorporating gaming into their upcoming event – Dannette Veale (Cisco) published a post regarding  objectives and considerations behind enabling gaming in that event.  I should disclose that I’m with INXPO, the virtual event platform that’s hosting this event – and we’re big believers in social gaming in virtual events.  So my prediction was a bit self serving.

I do believe in the effectiveness of gaming, especially in a virtual event or virtual business environment (e.g. for learning, retention, sponsor interaction, etc.) – as such, I expect to see an increasing amount of games (especially games with a social component) enabled in virtual events going forward.

Some vendors will integrate them into the core platform, while others will start by creating “one off” games that are loosely coupled with the underlying event platform.

In the U.S., the Virtual Edge Summit is the annual face-to-face event in the virtual events industry.  New this year was a “Business 3Di Track”, demonstrating the growing interest in immersiveness [see full program here].  I wrote:

Client interest and demand will drive some platforms to add immersive capabilities in 2010.  I don’t expect a software download, however – it would serve platforms well to support the immersive experience within their existing framework (e.g. Flash, JavaFX, Silverlight).

One of the exhibitors at Virtual Edge was Altadyn, who provides an offering called 3DXplorer – “the first ‘browser-based’ and ‘installation-free’ solution which enables a 3D interactive and fully immersive experience, accessible from any corporate or individual computer”.

In addition to Altadyn, one of the “pure play 2D event platforms” (at Virtual Edge) provided a demo of immersive capabilities they’ve incorporated into their platform.  I expect to see more experimentation and deployment in the second half of this year.

Since neither of these has yet to come true in 2010, this grade really could be an “F” or an “Incomplete”.  I’m still holding firm on this prediction, however, as I do expect some M&A activity in the second half of the year.

The first half of 2010 sure has flown by – on the predictions front, I’m looking decent so far at the half-way mark.  I’m expecting an eventful second half (pun intended).  What are your expectations for the second half of this year in our industry?  Leave your thoughts below in the comments section.

This entry was posted on Wednesday, June 9th, 2010 at 5:13 AM and is filed under Virtual Events. You can follow any responses to this entry through the RSS 2.0 feed. You can leave a response, or trackback from your own site.