In This Era of Digital and Social, The Extended Family is Closer than Ever 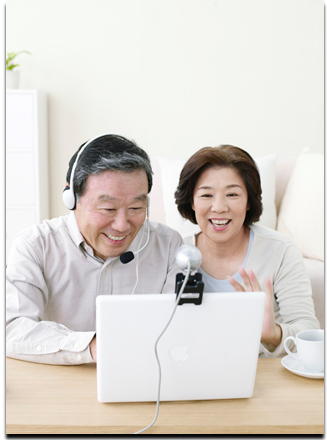 Note: I found this image to be perfect for this post; however, I have no known relation to the nice couple pictured.

And yet, with today’s prevalence of broadband, mobile technologies and social tools, doesn’t it feel like we’re as close as ever? How great is that.

Back when I was in elementary school, I remember recording audio tapes with my sister (in Chinese) that my mom would send to our maternal grandmother. Wouldn’t it be great for her to hear her U.S.-raised grandchildren attempt to speak Mandarin? Some two weeks later, grandma would get the tapes in the mail and be able to play them.

Fast forward to today, where my daughter leaves comments for her grandmother on Facebook (via my account), records a video greeting for her via my smartphone, or simply “dials” her up for a real-time video chat via Skype. In this era of digital and social, interactions are in real-time (when we want them to be) and we know more about our extended family than ever before.

I’ll highlight some of the tools that my extended family uses to stay in touch.

I once read a quote from a prominent executive, who noted that he learned more about his daughters in a few months on Facebook than he learned over all the years raising them. Isn’t that amazing? For people I’m closest to, I’ll learn things on Facebook that I otherwise would not have learned seeing them day in and day out.

In my extended family, photo and status sharing on Facebook has been great for daughters, sons, cousins, aunts, uncles and grandparents to have a sense of what’s going on in everyone’s lives.

From the iPhone’s high-quality camera to Flip video recorders, it’s easier than ever to record special moments wherever you happen to be: at home, on vacation, at graduation, or watching baby’s first steps.  The image and video quality captured by handheld devices has never been better.

In addition, the ability to instantly share, via email, Facebook, Twitter, etc. has allowed extended family members to “participate” in the moment a few seconds after it happened.  My mom, who would receive frequent Flip video footage of granddaughters on each coast, once remarked that “I love the Flip, it’s allowed me to watch my granddaughters develop.”

My extended family is a big fan of Skype. We tend to do synchronized video calls, where we pick a set time to call one another. We have three generations of the family using it, from grandchildren through to their grandparents. It’s really a lot of fun to observe grandparents video chatting with their grandchildren.

While I don’t expect the grandparents in our family to be enabled with mobile video, I do expect the younger generations of the family to practice more and more “spur of the moment” video calling, via Facetime, Skype for iPhone/Android and related technologies.

Email is the original “connector” for my extended family and for many others. Email continues to serve a purpose. It’s often used to ask a question of other family members (where, perhaps, Facebook is not the right tool).

And it’s a common distribution vehicle for much of the sharing we do (i.e. you want some more private sharing options beyond Facebook). But it’s interesting how email usage within the extended family is down a bit, due to the extensive sharing via Facebook, Skype, etc.

It’s a great time for extended families. With the combination of broadband, digital and social, go ahead and move halfway across the world – we can remain as close as ever.

Use the comments area below to let me know how your extended family stays in touch! Thank you.

Did you enjoy this blog posting? Subscribe to the feed here: https://allvirtual.wordpress.com/feed/

This entry was posted on Saturday, July 16th, 2011 at 7:00 AM and is filed under General. You can follow any responses to this entry through the RSS 2.0 feed. You can leave a response, or trackback from your own site.

2 Responses to In This Era of Digital and Social, The Extended Family is Closer than Ever