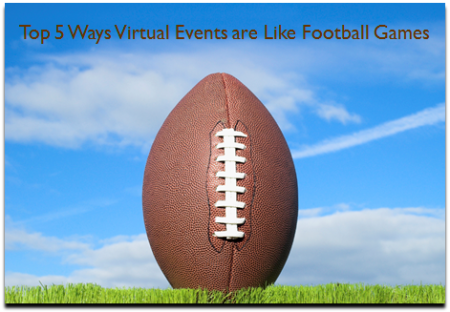 The 2011 World Series was simply amazing. But now that baseball is over, it’s time to turn my sporting attention entirely to football (American football, that is). After watching a weekend’s worth of football, it occurred to me that there are similarities between winning football games and producing successful virtual events. Let’s consider 5 ways they’re similar.

1) The Importance of the Game Plan

In the NFL, head coaches spend the entire week preparing for the upcoming game. They’ll put in 16 hour days and sleep on the sofa in their office. They plan the offensive schemes, the defensive schemes and they’ll even map out the play calls for their first drive.

Once they’ve done all their preparation, execution on the field becomes secondary. Yes, it’s important, but without a solid game plan, teams are less likely to claim victory. With virtual events, the game plan and preparation are equally important. As in football, make sure you script out your plays ahead of time.

2) Games Are Won and Lost on Turnovers

Interceptions and lost fumbles often dictate the outcome of football games. In virtual events, a “turnover” is anything that doesn’t occur as expected. It may be a technical glitch or a speaker who never shows up.

When a turnover happens in a football game, your defense must step up to the plate to limit the damage. In a virtual event, you’ll want contingency plans documented (in your pre-game planning) so that you have a “set of plays” to use for each possible turnover.

3) Delegate Important Tasks to Your Team

In football, wins and losses rest on the shoulders of the Head Coach. The coach, however, has an entire staff behind him, much in the same way that the President of The United States has a cabinet. Football teams have coaches for the offense, the defense, the offensive line, the quarterback and much more.

Are you the “Head Coach” of your virtual event? The first step will be to identify all the staff positions you need (e.g. marketing, operations, speaker coordination, sponsorship sales, etc.). Then, fill those positions with competent coaches, then delegate.

Ever see a quarterback on the sidelines, viewing a photograph with his coaches? By viewing a snapshot of that play’s formations, the quarterback is able to analyze what he did (or did not do) correctly on the given play.

In your virtual event, pause and take “snap shots” throughout the event. You’ll want to analyze things like number of attendees, attendance rate, average session time, number of chats, viewers per session, etc. Just as the quarterback may use photo analysis to make adjustments, learn from what your event snap shots tell you and make the appropriate in-game adjustments.

5) The Importance of Clock Management

Clock management, especially at the end of the two halves, is critical in football. You can’t score if you’ve run out of time.

In virtual events, clock management is first about mapping out the right schedule. For one thing, make sure you provide enough “down time” between scheduled activities so that everyone (e.g. staffers, attendees, presenters) can properly transition from one activity to the next.

Next, clock management in a virtual event is about sticking to your published schedule. If a session is scheduled to run 30 minutes, make sure you begin the “wrap-up” with 5 minutes remaining. Or better yet, go with football’s “two minute warning.”

Here’s to your success on the field. Remember that it all starts in your coaches’ office and practice facility. If you execute well in your virtual event, you can go home a hero on Friday’s and spend the weekends watching football. If you’re so inclined, that is!

This entry was posted on Monday, October 31st, 2011 at 5:40 AM and is filed under Virtual Events. You can follow any responses to this entry through the RSS 2.0 feed. You can leave a response, or trackback from your own site.