5 Ways to Get Started with Google Plus (#googleplus) 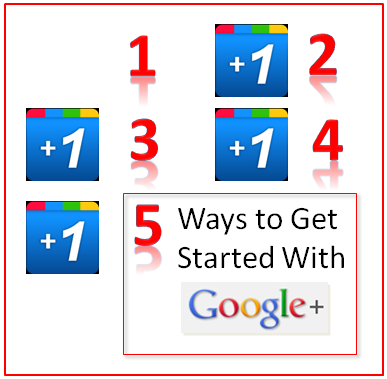 According to statistics provided by comScore, Google+ had 20 Million unique visitors in its first 21 days of service. comScore’s statistics were measured between June and July of this year (2011). While it took me a few months to jump aboard, I’ve been actively using Google+ for the past month. I thought I’d share some things I did to help me get started with the service.

Like Twitter’s tweet stream and Facebook’s Newsfeed, your experience on Google+ is largely defined by the people you follow. In Google+ parlance, this is called “people in your circles.” Visit your “Circles” page, then click on “Find people”. As you add people to your Circles, Google+ gets smarter about its recommendations, since it can find people that both you and a recently added user have in their Circles.

As you find people you’d like to add, determine which of your circles to place them in. I currently have 221 people in my Circles. This is quite manageable for me and quite different from the 1,300+ people I follow on Twitter. As a result, I place nearly everyone in a single Circle and my default mode is to read the Stream from all Circles.

Unless you’re a celebrity or a social media A-lister, you’ll find that a modest number of people have added you to their Circles. So think of Google+ as a cocktail party that you just arrived at. No one’s coming to chat you up, so grab a drink and go mingle. As you meet and interact with new people, you’ll start to gain attention.

How can you do this? It’s easy:

If you’re new to Google+, posting to your page (alone) won’t cut it. “Go out” to find and discover interesting content (and people) and you’ll feel that much more a part of the community.

Click the “What’s hot” link on the left side of your Google+ page. Your Stream then gets filled with popular posts on Google+ – those that received a higher number of +1’s and comments. I use this as an effective way for finding interesting content – and, discovering interesting people (or Google+ Pages) to add to my Circles.

When I gave a presentation on personal branding earlier this year, several audience members asked my opinion on whether they should start a blog. With Google+, there’s apparently no character limitation on posts. I’m seeing some users opt to publish long-form content on their pages. These longer posts look a lot like blog posts.

So if you’ve been wondering whether (or when) to start a blog, experiment on Google+ and drop a long-form post here and there. There’s no set-up required and you can connect it right into your Google+ social graph. Perhaps you’ll find my next blog posting there (and not here).

I use Twitter for “all business” and Facebook for “all pleasure.” So it didn’t make sense to me that I’d use Google+ in an identical (or even similar) fashion to an existing social network. Instead, it’s served as a nice middle ground between the two. I mix business-related content with personal interests and I can use a “voice” different than what’s possible within 140 characters. For instance, here’s a recent post I made about Amy Grant.

3 Things You Didn’t Know About Google+

You can grow an instant moustache.

You can tell the world that you talk to yourself.

You can provide feedback and send a screen grab of the Google+ page.

The following tip is provided by Heidi Thorne (Heidi on Google+.)

Remember the early days of Twitter (like 2008 and 2009) when people were putting statements such as “follow me and I’ll follow you back” in their bios? Tweeters were anxious to build their Twitter street cred by having kaboodles of followers. And you also saw people who followed anyone whose Twitter handle they could find, hoping for a reciprocal follow. Didn’t care if they were relevant or not. Only the numbers mattered.

Now it’s a social media lifetime later. We’re more cynical and overwhelmed with Twitter, Facebook, LinkedIn and a host of social network wannabes flooding our streams and attention. Active social media types were rejoicing at the prospect of starting over with a network from a technology powerhouse like Google. They could get rid of the junk followings and followers, put their contacts in appropriate categories or “circles,” with the goal to only see what’s relevant. And Google+ delivers on that. Kind of like what Twitter lists and Facebook and LinkedIn groups hoped to be, only in an easier to manage and manipulate format.

But you still see people trying to use Google+ as if it’s the early days of Twitter. In a day, I might have a dozen or so people circling me that I have no idea how they’ve connected with me. Do I automatically add them to my circles as a reciprocal courtesy? No way! If it’s not someone from one of my established networks or someone I regularly follow, or doesn’t have a bio filled out, I don’t circle them. But I will follow people I’ve met in discussions on other people’s posts who have fun, interesting or intelligent conversation. In fact, I’ve found some incredible new people on G+ that way.

So use Google+ as a clean social media slate, only filling that stream with what matters to you.

The following tip is provided by Jenise Fryatt (Jenise on Google+).

Most of the time I use Google+ for the Hangouts function.  I’ve found hangouts to be easier and more consistent than Skype for video chats.  You can chat with up to 10 people and starting a Hangout and inviting people to it is very easy.  I’m going to try using it for regular company meetings when some of us are out of town.

I’m enjoying my time on Google+ so far. It’s a neat mix of Twitter, Facebook and a few other services. Use the comments section below to let us know how you’re using the service. In the meantime, you can find me on Google+ here: http://gplus.to/dshiao.

This entry was posted on Monday, December 12th, 2011 at 6:05 AM and is filed under Social Media. You can follow any responses to this entry through the RSS 2.0 feed. You can leave a response, or trackback from your own site.