The Cost of Convenience on Social Networks

Technology can do great things. It can save you time and save you money. With social media, it can connect you (via the device in your pocket) to people around the world – people you otherwise would never have “met.” But is there a drawback or cost to the convenience that technology provides?

An Example: The GPS

Consider the GPS (Global Positioning System). When I purchased my first GPS unit in 2005, I thought it was the world’s finest invention. Whether I was driving near home or in a remote town, I could plug in a street address and this magical device would take me there, turn by turn.

When I moved to the West Coast a few years later, my handy GPS helped me get around my new surroundings, from the department store to the movie theater to my new favorite restaurants. But now that I’ve been out West for five years, I’m finding a “cost” for the GPS that goes beyond the retail cost.

The “cost” was a dependence on this technological marvel, which meant that I didn’t truly know my own surroundings. Instead, I’d have the radio on, take the turns that the GPS called out, but not pay attention to the route I was taking (and, as a side note, I’ve since switched from a GPS device to the excellent Waze app on my iPhone).

Now, if I’m driving locally to a place I’ve never been before, I’ll plug the destination address into Google Maps and review the route. Then, I’ll drive to my destination without any technological guidance. And I find that curbing my dependence on the GPS has helped me better learn the local roads and routes. And not to worry, Waze – you’ll still come along for the ride when I go out of town.

Now, let’s consider the cost of convenience on social networks.

The person whose Comment you Liked would see your action and perhaps they’d become more inclined to comment on your subsequent posts. There have been occasions where I ponder how to respond to a comment I’ve received. If it was a witty comment, I feel the need to return the favor with something equally witty. I’ll occasionally get “stuck,” and not know what to say. So instead I simply click “Like” (on the comment) and I’m done.

So what’s the cost? More substantial and meaningful interactions between you and the commenter.

In 2009, Twitter rolled out the retweet button (and function). The retweet (or, “RT” for short) was a capability conceived by Twitter’s users. And prior to the retweet button (or, the equivalent function in Twitter clients), users had to manually compose retweet’s by copying the tweet content, then sticking a “RT @USER” in front of the tweet.

The retweet function made it super convenient. With two clicks of the mouse (the first to retweet, the second to confirm it), you just published a tweet, while promoting the original tweet content. Because the retweet preserves 100% of the original tweet, the cost of this convenience is an absence of commentary (from you).

When I want to add my own thoughts (e.g. “Great post” or “Excellent points”) on a retweet, I’ll manually compose it (with a copy/paste of the original tweet), then change the “RT” to “MT” (for “Modified Tweet”). This makes the process less convenient, but I find the additional commentary worth it (and I bet the original tweeter may as well). 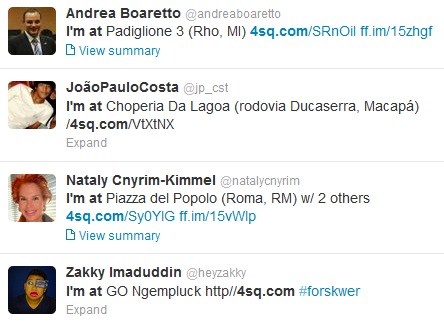 Location-based check-ins began on services like Foursquare. Their purpose was to alert friends (on the service) of your location. Perhaps you’re at Happy Hour and you see that some friends just checked in from the watering hole down the street. So you go there to find them.

So that was the original point – and a fine point it was. Soon, services such as Foursquare enabled you to broadcast your check-in to your social media accounts. And our tweet stream started to get filled up with tweets, like those shown above.

Similarly, Facebook has a check-in feature that enables you to list your location, along with tagging Facebook friends that you happen to be with. For friends and family on Facebook, I am, in fact, more interested in where you happen to be.

But, the convenience of the check-in means that more significant and meaningful descriptions (of  your location) go by the wayside. For instance, compare these two Facebook posts:

And here’s the more convenient one:

“Climbing to the peak – at Mount Everest”

Don’t get me wrong: photos are great and pictures are, in fact, worth 1,000 words (or more). Sometimes, however, the convenience of uploading 50 pictures (to an album on Facebook) gives you the “excuse” that the pictures can tell the story (on their own). If a picture is worth 1,000 words, couldn’t you at least tag each one with 140 characters?