Dusk turned to dark and I walked from my hotel onto Piazza San Marco in Venice. As I reach the square, musical performers entertain a large crowd:

“When the moon hits your eye like a big pizza pie, that’s amore.”

A portly man belts out lyrics from the song made famous by Dean Martin. He’s joined by performers on the accordion and clarinet. I gather alongside a crowd of nearly 100 people. I squeeze my way forward, so I can see the stage.

Here’s a photo of the performers: 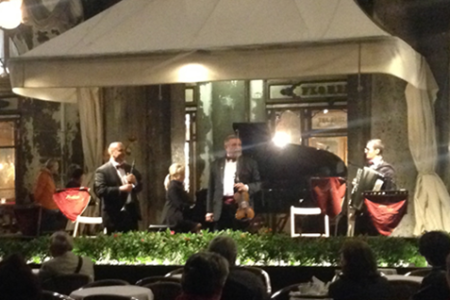 The singer played to the crowd. He’d start in, “When the moon hits your eye like a big pizza pie…” then pause. He’d raise his arms to urge us to finish the lyric. When we fell short, he’d raise his arms again, as if to say, “What happened?”

The next time he came around to those lyrics, we did a better job chiming in. Here’s a photo of the assembled crowd: 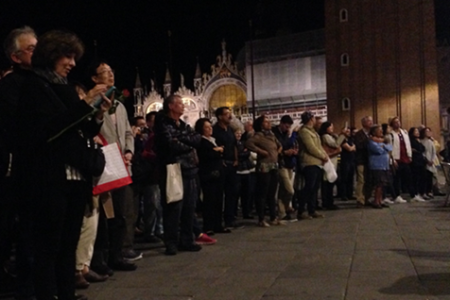 After a few more songs, the singer had a message for the crowd. Knowing we were mostly tourists, he chose English:

None of us stuck around for the 15 minutes. We saw another group performing across the square. The crowd of 20 people soon turned to 120 when we all walked over.

This group featured a violinist playing classical music. I stayed for a few of their songs, then left to explore other parts of town.

Both performances took place at cafes with outdoor seating. They hired the musicians and the performances drew crowds. But guess what? The tables were 10% occupied. The “free” crowd outnumbered the paying customers 20:1.

While I enjoyed both performance groups, I left each cafe without spending a dime. In fact, I don’t even know the name of either cafe. On a return visit to Venice, I may seek out the evening entertainment in Piazza San Marco, but have no affinity or loyalty to a particular cafe.

That’s a lost opportunity to the cafe!

Make your readers come back to sit at a table. Soon enough, they’ll be ordering food and drink.