At NAB Show 2011 in Las Vegas, American Express OPEN (@OPENForum) created a game-based attraction in a lobby area that generated nearly a thousand (my estimate) sales leads.  Attendees were invited to play a Memory Match game, with an iPad 2 awarded to each day’s top performer. Read further for my thoughts on what made their approach so effective.

How They Attracted a Crowd

At any trade show, whether it’s physical or virtual, you want to attract a crowd to your space (or booth). To attract interest, location sure helps. The OPEN attraction was located in the lobby, right beyond the entrance and adjacent to the Information Desk.  Location goes only so far, however – you need to give attendees a reason to walk over to see what’s going on. OPEN achieved this with a prominent physical structure, along with an engaging host. 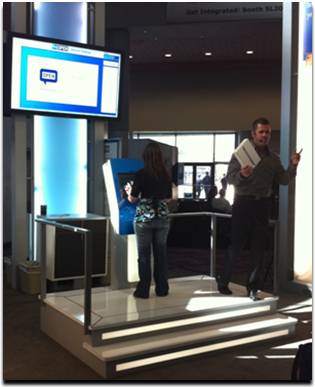 The host engaged simultaneously with the player and the audience, rooting the player along, while playing things up to the crowd, to generate excitement. Since the host spoke into a microphone, he garnered the attention of attendees who were walking by.

How They Tapped Into Attendees’ Competitive Juices

The brilliance of OPEN’s Memory Match game was the “score” (the time it took you to complete all matches – the lower the time, the better) and the leaderboard.  If the top score was “35 seconds,” then each contestant knew that they had to beat 35 seconds in order to win the iPad 2 (or, at least to attain the top spot on the leaderboard).

With a typical booth giveaway, you drop your business card in a fishbowl and hope that your name gets picked. The OPEN giveaway was different, because it tapped into the competitive spirit in all of us.  Contestants feel like they can control their destiny, unlike the random pick out of a bowl.  And, they’re presented with a clear goal in mind.

The game dynamic created a byproduct: an intense amount of excitement each time someone set the new “record”.  A woman who obtained the top time of the day jumped and screamed her way off the platform, as the crowd roared. It was like Tiger Woods sinking a birdie putt at The Majors – and, it drew further interest from passersby.

How They Captured Leads

Before beginning the Memory Match game, contestants needed to enter their information on the game console – the process was quite similar to filling out a registration page.  While leads from viewers (in the “audience”) were presumably not captured, all attendees who played the Memory Match left their name and contact information.  By providing a fun experience to visitors, OPEN can expect a stronger response from sales prospects compared to a more conventional show presence (i.e. without the game).

How They Provided Instant Gratification

Only a single visitor would win the iPad 2 each day, which means that 99% of visitors would go home empty handed. Not so with OPEN: they occasionally handed out $10 Starbucks cards to those contestants who showed their AmEx card. A great way to send visitors away happy, and to reinforce the notion that “membership has its privileges.”

Conclusion: Apply This to Your Virtual or Physical Trade Show Booth

Things to consider for your next trade show, whether it’s virtual or physical:

This entry was posted on Tuesday, April 26th, 2011 at 5:45 AM and is filed under Lead Generation. You can follow any responses to this entry through the RSS 2.0 feed. You can leave a response, or trackback from your own site.