Let’s Hangout, Then Share Our Conversation with the World

I’ve met neither Heidi Thorne (@heidithorne) nor Marti Konstant (@martikonstant) in person. I’ve known Heidi for quite some time (via Twitter) and earlier this week, she introduced me to Marti. It’s the sort of thing that I wrote about previously – how magical social media can be in forging new connections.

Here’s the sequence of events:

Looking back on this sequence, I found it interesting that these connections and conversations occurred via Twitter, Google+, Skype and Google+ Hangouts. What was absent? Phones, emails and automobiles.

I wanted to further highlight these Marketing Hack Chats that Marti has put together. You can view these on Marti’s Google+ Page and on her YouTube Channel. Let’s cover some reasons I find Marti’s chats appealing.

Simple Logistics: Video at the Speed of a Mouse Click 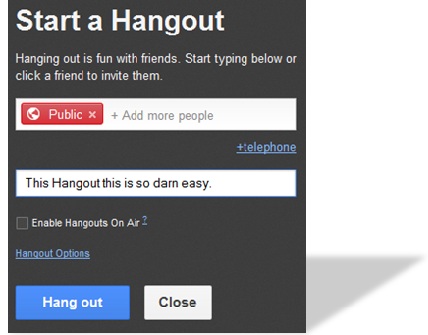 Marti’s own marketing hack involves the use of the “Hangouts On Air” feature, which live streams the interview to YouTube, but also records the session, for on-demand playback on YouTube – and in embedded players, such as Marti’s Google+ page.

The video logistics are super simple and so is the publishing process. In fact, there’s no “process,” as Marti can publish the “finished product” to her Google+ page instantly. In addition, the video becomes available for viewing (and search) on YouTube at the same time.

How’s this for efficiency: I joined Marti’s Hangout at 12PM PT and the video was published on her Google+ page a mere 22 minutes later. Nice.

With Google+ Hangouts, Marti doesn’t have to worry about a video studio, a video crew, editing software or purchasing mass amounts of storage. As you’ll see in these videos, Marti records them from home, with a staff of one (herself).

So, assuming Marti already had a computer, webcam, broadband line, etc., then her incremental cost for the Marketing Hack Chat is ZERO. She plans to interview and record 20-30+ marketing professionals from all over the world. Where else (besides social media and social technologies) can all of this be coordinated and executed at a cost of zero?

Now, of course, by “cost,” I mean hard costs. There is the time and energy required (by Marti) to network with marketers, recruit speakers, prepare for the interviews, hold the interviews, promote the videos, etc.

Marti told me that the idea behind her program is to provide marketers with actionable advice that they can use right away. I love this principle. As a marketer herself, Marti is finding a great recipe to connect with other marketers:

Thanks for having me on your program, Marti! I enjoyed chatting with you. I’m working my way through all of the marketing hacks and look forward to the subsequent interviews you’ll publish. And for those of you interested, you can view my hack below:

This entry was posted on Saturday, July 21st, 2012 at 5:05 AM and is filed under Google+. You can follow any responses to this entry through the RSS 2.0 feed. You can leave a response, or trackback from your own site.