It’s a Sunday afternoon and the New York Giants are visiting the Dallas Cowboys. The game is being shown locally (in the Bay Area), but I’m at an outlet mall in Napa, CA. I search the stores and the food court, but no one is showing the game.

So I do the next best thing. With the battery on my phone running low, I make my way to the mall’s management office. It’s closed, but there’s an air conditioned hallway and bingo! An available outlet. So I charge my phone and make myself comfortable on the floor. From that spot, I take in the second half of this exciting game … via ESPN Gamecast.

ESPN Gamecast, delivered via your browser, is quite good. I’ve been using it to “watch” MLB and NFL games. It provides near real-time, play-by-play updates on the game, all without having to refresh the page.

Occasionally, I’ll get antsy when no update has been posted for 10 seconds. I’ll refresh the page to see if that pulls in the latest play. Sometimes that works. Other times, the game may have gone to a TV timeout without me realizing it.

An Endless Wait on a Key Play

And then it happened. Late in the fourth quarter, Gamecast posted an update that Dez Bryant of the Cowboys had caught a go-ahead touchdown. I was quite bummed. But then I noticed that no further updates (e.g. extra point, kickoff, etc.) were posted for close to a minute.

I then saw Gamecast post an update that the play was under review. A few minutes turned into a few more minutes. I nervously anticipated the replay result, but no news as of yet. So I turned to Twitter. 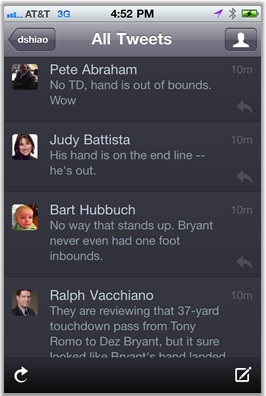 And that’s when I realized:

As it turned out, the call was reversed and the Giants held on to win the game.

If you weren’t watching on TV, then Twitter was the place where you’d get the replay result first (it beat Gamecast by a few minutes). Twitter can be even quicker than real-time in some instances – it can serve as a leading indicator of what’s about to happen (e.g. sports, stocks, box office receipts, elections, etc.).

Let’s face it, Twitter is the place where athletes, coaches, sports writers, general managers and owners choose to provide their updates, thoughts and musings to the world.

When I watch a big game, I can always turn to Twitter to get real-time scoring updates – and importantly, real-time commentary on what’s happening. And it’s all because the “right” people are active on Twitter – and, I’ve chosen to follow them there.

Additionally, beyond the athletes and the “experts,” millions of fans (like me) are active on Twitter as well. And while I may not follow them all, I can experience their tweets via event or team-specific hash tags, such as #Giants, #Postseason, #WorldSeries and #SuperBowl.

The Efficiency of 140 Characters

Twitter would be an entirely different animal if it permitted 280, 560 or 1,400 characters. The 140 character limit results in short bursts of updates and the smaller “payload” means that information can be distributed, read and processed quicker. For real-time updates, after all, we don’t want essays, we want snippets.

When watching sports at home, we’re likely on our laptop or tablet. Outside of home, however, we’re probably on our smartphone. And that makes it convenient to share real-time information with others – and to consume it as well.

That’s why Twitter has been effective in providing real-time information during natural disasters. A Mercury News article about the Tohoku Earthquake (in Japan) noted that the Internet (and Twitter) was used to communicate information when the phone system was unavailable.

To quote a member of Cisco Systems’ emergency response operations, “text data uses a relatively smaller portion of bandwidth than voice data does.”

In the big picture, an NFL game is trivial compared to other real-world events. But like those other events, things unfold in real-time.

And experiencing this NFL game via Twitter helped me fully grasp how effective it is for real-time communications. In fact, I’m looking forward to tomorrow’s presidential election here in the United States, during which Twitter will provide me with updates. In real-time, of course.

This entry was posted on Monday, November 5th, 2012 at 5:05 AM and is filed under Twitter. You can follow any responses to this entry through the RSS 2.0 feed. You can leave a response, or trackback from your own site.

2 Responses to Twitter on The Real-Time Web: There is #NothingBetter