The WordPress.com stats helper monkeys prepared a 2011 annual report for this blog.

The concert hall at the Syndey Opera House holds 2,700 people. This blog was viewed about 27,000 times in 2011. If it were a concert at Sydney Opera House, it would take about 10 sold-out performances for that many people to see it.

Just In Time For The Holidays: Generate Sales Leads With Virtual Events

Virtual events can be a dream for marketers.  In 2011, you can leverage virtual events to generate more leads to fuel your sales pipeline.  And, you can qualify those leads “on the spot”, in what I call “accelerated lead generation”.

With a virtual event, you have the opportunity to engage in real-time with your sales leads and review a rich engagement profile that uncovers their degree of interest in your products – and, their position in the sales cycle.

Got marketers on your holiday list?  The printed version of “Generate Sales Leads With Virtual Event” is now available at a list price of $12.99 (UPDATE: the book is now listed for $11.69).

Buy the Paperback: at Amazon.com

Buy the Paperback: at BarnesAndNoble.com

What Virtual Events Really Do

In the book “Duct Tape Marketing” by John Jantsch (subtitle: “The World’s Most Practical Small Business Marketing Guide”), there’s a paragraph in Chapter 2 titled “What You Really Sell.”  Here’s an excerpt of that paragraph:

“Here’s the funny thing about business. You don’t sell what it is you claim to offer.  You sell what the eventual buyers think they are going to get from your product. For instance, insurance sales folks don’t sell insurance; they sell peace of mind.  Chiropractors don’t sell neck adjustments; they sell some form of relief.”

I don’t know whether my 2011 prediction will come true, but I do expect that by later this year, the “virtual” qualifier will start to be dropped, in favor of broader names.  With that being said, and in the spirit of Duct Tape Marketing, here’s my Top 10 List of what virtual “events” really do:

Each of these terms better describes “what the eventual buyers think they are going to get from your product” than the term “virtual event.”

Share with us your thoughts – when you “purchase” a virtual event, what is it you’re really getting?

The Future Of Virtual Events 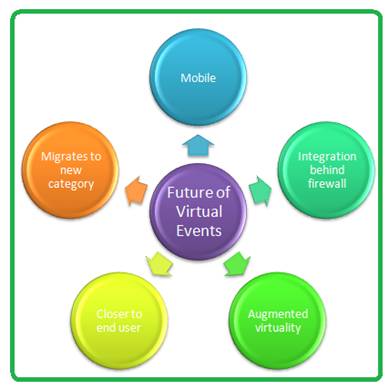 There’s no time like the present … to think about the future.  I previously wrote about predictions for the virtual event industry in 2010 – those predictions were based around a short-term outlook and have a reasonable chance of coming true.  Now, I’d like to weigh in on 2011 (and beyond) and discuss where the industry (and the technology behind it) may be heading. 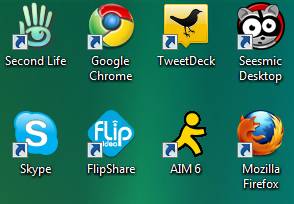 To spur increased adoption, the virtual event experience will move closer to the end user.  To move closer, the browser-based experience of today will be complemented by numerous apps that live outside of the browser.  A relevant analogy is Twitter, which could not have achieved its place in the world on twitter.com alone – its power is broadened with desktop clients such as TweetDeck and Seesmic.  Possibilities include:

Related to “getting closer” to the end user, mobile is the “elephant in the room” for virtual events.  The mobile apps will start off quite simple – think again of the dashboard app, which provides a real-time view of what’s going on within the event.

Building onto the dashboard will be basic interactivity (e.g. text chat) – allowing attendees and exhibitors the ability to chat with others.  An exhibitor, for instance, can now staff her booth “on the go” from her iPhone.

As we look to 2011 and beyond, I see a clear shift in the computing landscape, whereby more and more “computing” moves from the desktop and laptop and on to mobile devices.  In this decade, the smartphone becomes the PC of the past decade.

The challenge for virtual event platform providers is to determine where to place their bets (investments) across iPhone, Android, BlackBerry, Symbian, Windows Mobile and Palm.

Tighter Integration Inside The Firewall

This drive from corporations will cause virtual event technology to morph a bit, shifting from a 100% software as a service (SaaS) model to a hybrid model that combines SaaS with on-premise software.

At first, integration points to a company’s enterprise apps may reside “on premise” on corporate servers – subsequently, corporations may require the underlying virtual event platform be hosted inside the firewall – a model that mirrors Linden Lab and their Second Life Enterprise.

Physical event attendees will begin to experience an event through the lens of their smartphone – holding up the smartphone at any location and seeing overlays of relevant information.

Based on the trends I’ve outlined, by 2011 (if not sooner), we’ll no longer refer to “virtual events”.  Instead, they’ll have “grown up” and migrated into a broader category of business or collaboration application.  Virtual event technology becomes a toolset in a larger ecosystem – or, they’re integrated into a broader suite of tools (rather than being a standalone solution).

In a few years, these will no longer be your mother’s virtual events!  The industry and technology will change, morph and adapt to suit the needs of the market.  Let’s all be thankful that we’re along for the ride.