Telepresence In Virtual Events With G2Events

In the mid-year report card on my 2010 virtual event predictions, I wrote about the first telepresence-enabled virtual event – the “Sustainability Virtual Summit: Smart ICT”, produced by G2Events.  Subsequent to my posting, I heard from Bruno Castejon, Senior Vice President and Co-Founder of G2Events. 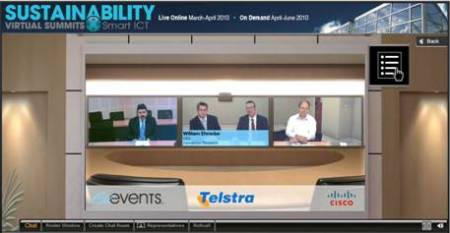 “Sustainability Virtual Summit: Smart ICT” had 8 sessions (out of a total of 35) that included Telepresence enablement.  Five of the eight sessions were round-table discussions with panelists participating from different geographic locations. G2Events is looking at physical events as well, where Telepresence can serve to bridge on-site and remote participants.

According to G2Events, there is a science behind the technology and process for bringing Telepresence into physical events, especially when one factors in cost and scalability considerations.  “G2events believes Telepresence is one of the most promising technologies to bridge the physical and virtual event worlds and optimize the value of a true hybrid model”, said Castejon.

Notes Castejon, “This will really be a showcase hybrid event demonstrating how Telepresence, in addition of being a very powerful collaboration solution, is also an impactful channel to efficiently reach out to large audiences for marketing purposes”.

At Sustainability Virtual Summits, Telepresence-enabled panels had increased attendee satisfaction – delegates were most engaged with that format.  Castejon notes that the viewing “completion rate” for the Telepresence-enabled panels was by far the highest of all content broadcast during the show.  “They constituted the very reason why the average time at the event was over 2 hours and 50 minutes per attendee”, notes Castejon.

Bruno contributes two of his own predictions for 2010:

Think of it as “Telepresence as a Service” – you receive the benefits of Telepresence without the capital investment and hardware support.  “You can now show up at a public Telepresence facility (e.g. Cisco, Marriott, Taj, Starwood) nearby and rent both the room and infrastructure at a cost of $300 or lower”, notes Castejon.  The “Telepresence footprint” (both private and public) is reaching critical mass.  Castejon adds, “The number of rooms is now such that it provides proximity with most, if not all the main business hubs in the world”.

At the InfoComm conference last week, Cisco announced “interoperability between Cisco and Tandberg TelePresence systems, and with other third-party systems, by integrating the Telepresence Interoperability Protocol (TIP) on Cisco’s newly acquired Tandberg TelePresence Server”. Castejon says this “is a BIG deal”, since it allows one vendor’s system to interoperate with another’s (e.g. in theory, a session betweeen Cisco Telepresence and HP Halo systems).

While TIP does define interoperability at a protocol level, Castejon notes that telcos will need to follow suit on carrier interoperability.  “Existing private and public Telepresence deployments are on private networks. As of today, I do not believe these carriers have found a way to manage Telepresence roaming. If two parties use different carriers (e.g. one AT&T and the other BT), they still might not be able to communicate”, notes Castejon.

Telepresence is a technology to watch – it can facilitate a “virtual meeting” or “virtual event” on its own.  Combined with a virtual event, however, it can significantly expand its audience reach and power.  If you plan to integrate Telepresence into your virtual events, leave a comment below and let us know of your plans.

A House Call Via Webcam

While channel surfing during the holidays, I came across a re-run of House, the excellent medical drama on FOX.  In this particular episode, Dr. Gregory House was performing some patient triage over a webcam.  I thought to myself, “that’s a really neat application of video calling technology”.  Today, I read an article in the New York Times by Claire Cain Miller, “Doctors Will Make Web Calls in Hawaii”.  The company enabling this service is American Well, a Boston-based start-up who is pioneering the “New Healthcare Marketplace”.  The web call service in Hawaii works like this:

Patients use the service by logging on to participating health plans’ Web sites. Doctors hold 10-minute appointments, which can be extended for a fee, and can file prescriptions and view patients’ medical histories through the system. American Well is working with HealthVault, Microsoft’s electronic medical records service, and ActiveHealth Management, a subsidiary of Aetna, which scans patients’ medical history for gaps in their previous care and alerts doctors during their American Well appointment.

For patients insured by Hawaii Medical Service Association (American Well’s customer), the cost is $10 to use the service.  How affordable.  Back when gas prices were sky high, one might spend this same amount just to make the drive to the doctor’s office!  And in Hawaii, as the article notes, the islands are remote, which means that getting to see one’s physician may truly be a journey.

There are concerns, however, with such an approach:

However, some critics of doctor visits via webcam worry that doctors will miss important symptoms if they do not see patients in person. Others doubt that the poor and uninsured will have the broadband connection and webcams to use the service. .

“It’s a tool to help doctors do better, the way a stethoscope is a tool,” said Robert Sussman, a family practice doctor on Oahu. “You still have to use your common sense, your medical knowledge.”

I agree with Dr. Sussman – this technology does not replace the house call or doctor’s visit, but it does create a convenient, cost effective and carbon friendly “tool” for receiving health care.

Perhaps some medical insurers will create a network of Telepresence centers, where residents in certain locations (e.g. who live far from their physician) can travel a shorter distance to receive a “web call” via a high-tech, high definition solution. Of course, the doctor would need to use a Telepresence station on her end as well (so, some details need to be worked out!).

Or some day, perhaps you’ll beam a 3D representation of yourself into a virtual world and ask Dr. House to meet you there (for your check-up).  The possibilities await! 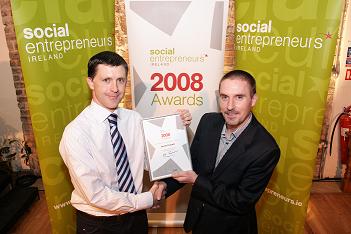 Q&A with James Corbett, founder of the not-for-profit organization Vizitant.

More Meetings From Your Desk

It’s a growing trend.  In 2009, you’ll be attending more and more meetings.  From your desk and desktop, that is.  In a Travel Procurement article titled “The Next Best Thing To Being There: Virtual Meetings Earn Their Rightful Place In Strategic Meetings Management”, surveyed travel buyers confirm that the trend is real:

“Our policy is set up so that virtual media must be considered if business objectives can be achieved,” said Diana Johantgen, service manager for Procter & Gamble’s new meeting, event and convention management team, who helped incorporate a virtual meetings program into that company’s strategic meetings management program.

Additionally, online meetings provide unique benefits, such as the meeting archive.   Ever need to schedule a series of information sessions or training presentations?  Why not do a virtual meeting (live) and record it – take the archive, edit it down (if needed) and then allow all reamining groups to view the session on-demand, on their schedule.  If the presentation is mandatory, the online meeting can be tracked to ensure that all required users end up viewing it.